Welcome Back to Our Returning Shlichim 5775 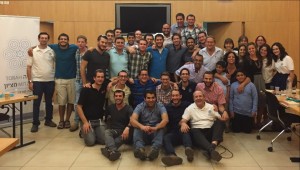 On Isru Chag Sukkot all of our returning Shlichim joined us for our annual Kennes Shlichim Chozrim. It was an opportunity to thank them and show our deep appreciation to them, as well as wish them luck upon their return to Israel.

The shlichim served in 11 locations worldwide, from Montreal, Canada to Montevideo, Uruguay. They shared many significant experiences and stories; Geva Frenkel (Cape Town) told how he is still keeping in touch with teens and how he already met those who are currently visiting Israel. From Gitit Rechavi (Munich) we heard of a young man who grew up in Germany with nearly no Jewish identity, and is now, thanks to the shlichim, learning in a pre-army mechina in in Israel. And of course we celebrated with Moshe Sigel (Sydney), who just got engaged to a local girl, Liora, who is now making Aliyah!

Ori Hachohen (Munich) spoke on behalf of the shlichim. He shared with us how he returned with a much stronger internalization of “Ve’ahavta Lereacha Kamocha”, and that he now feels a deeper connection to his people and to The State of Israel.

We were honored to host Rabbi Yechiel Wasserman, Head of the Center for Religious Affairs in the Diaspora, in the WZO, who shared divrei bracha with the Shlichim. 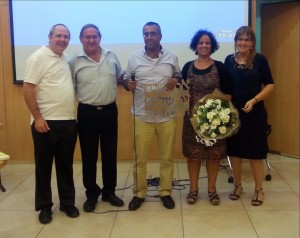 This year, we chose to express our gratitude to Yakov Gehasi, who has been Torah MiTzion’s accountant for the past twenty years. Yaakov and his wife, Orit, were presented with a gift in honor of their years of dedicated service to Torah MiTzion.