By Rabbi Moshe Bloom Former Rosh Kollel (Warsaw, 2013-17) Currently Head of the English department at Machon HaTorah Ve’Haaretz, |the Institute for Torah and the Land of Israel

“. “וְכִי תָבֹאוּ אֶל הָאָרֶץ, וּנְטַעְתֶּם כָּל עֵץ מַאֲכָל וַעֲרַלְתֶּם עָרְלָתוֹ, אֶת פִּרְיוֹ; שָׁלֹשׁ שָׁנִים, יִהְיֶה לָכֶם עֲרֵלִים לֹא יֵאָכֵל 91:23).Vayikra“When you enter the land and plant any tree for food, you shall regard its fruit as forbidden; three years it shall be forbidden for you, not to be eaten” (   While the prohibition of orlah is well known, most are not aware of the many details involved. Orlah is relevant to those growing trees in their yards (and even inside their homes) and to those who buy fruit in the open market and elsewhere. 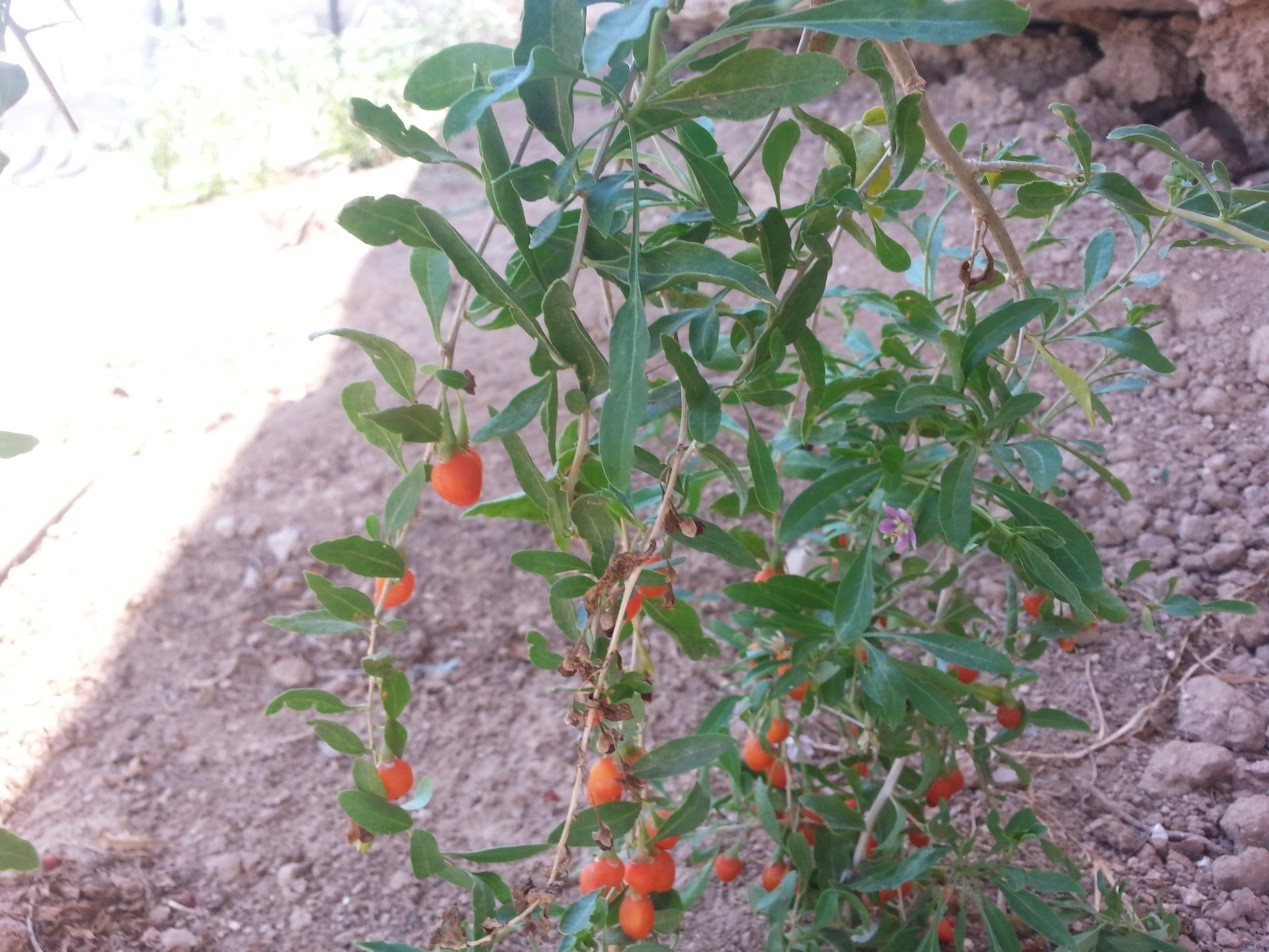 A goji berry plant growing in Shavei Darom, one of the experiments at Torah VeHa’aretz Institute. Photograph by: Agronomist Yehuda Heller.

What is a Goji Berry?

The goji berry plant (Lycium barbarum) is a perennial bush, which generally reaches 1-3 m high, originating from Southeast Asia. It blooms in the summer (June to September) and its fruit somewhat resembles a strawberry and a cherry tomato, growing to the small size of 1-2 cm long. The goji berry is considered a super food (while some are doubtful about this). It is rich in Vitamin C and other vitamins, various amino acids, antioxidants and has additional health benefits. Until just a few years ago, dried goji berries were imported from the Far East and sold at an expensive price in Israel. In recent years, Israeli farmers began growing the goji berry locally in order to sell it fresh (at a higher price, of course). The farmers turned to the Chief Rabbinate, and Rabbi Yizchak Yosef, the Sephardic chief rabbi, in turn, contacted Torah VeHa’aretz Institute with the question: is the goji berry subject to orlah laws?

Classifying a plant as a tree as opposed to a vegetable (a “bush” is not a distinct halachic category) relates to several areas of halacha:   1. The blessing: ha’eitz or ha’adama (although in this case, when there is a doubt we say ha’adama, which, bedi’avad, also covers trees). 2. Kilei zera’im: the prohibition against interplanting different species of seeds. The prohibition applies to vegetables but not to trees. 3. Kilei hakerem: interplanting with vineyards. The prohibition applies to vegetables but not to trees. 4. Blessing over pleasant scents: either borei atzei besamim or borei isbei besamim. 5. Blessing over the trees (birkat ha’ilanot) 6. Orlah   It is abundantly clear that a date palm is a tree and a cucumber is a vegetable. But what is the precise definition that distinguishes trees from vegetables? A tree is a perennial plant that grows new branches from its trunk (above the ground) and not from its roots. This is a general halachic definition found in the Gemara and Rishonim. It is for this reason that bananas, for instance, are considered vegetables since new banana shoots grow from the roots.

The Radbaz, Rabbi David Ibn Zimra (1479-1589), made Aliya from Egypt and was astounded by what he saw. G-d fearing Jews were eating ברינגא”ן, a type of eggplant that the Radbaz had believed was possibly orlah, which would be prohibited in the Land of Israel like any safek issur de’oraita. In this context, he writes the following innovation in the classification of plants: When I made Aliya to the Land of Israel, I saw that everyone was eating [this eggplant], which means they had no doubt that it was a vegetable. In the case of doubt they should have been stringent, since we are stringent regarding biblical prohibitions [and orlah is a biblical prohibition in the Land of Israel]. [Even though, according to the usual halachic parameters, the eggplant would be considered a tree, since it is perennial and grows new branches from the trunk,] I had an innovation [which no other posek mentions] as to a different feature distinguishing vegetables from trees: a plant is not a tree if once its seed is planted, it produces fruit in less than a year. For this reason the eggplant is a vegetable, since it bears fruit in less than a year from the time it is planted.. (Responsa Radbaz vol. 3, §531)

That is, a plant that bear fruit in less than a year from the moment the seed is planted is considered a vegetable and not a tree. Most of the Sephardi poskim follow this ruling, including the Ben Ish Chai and Rabbi Ovadia Yosef. Most Ashkenazi poskim, however, do not accept the Radbaz’s chidush.

What is the current situation in Israel?

To test whether or not the goji berry plant is a vegetable, we planted it in our agricultural experiment plot. Indeed, it bore fruit in less than a year. Following our experiment, Rabbi Yitzchak Yosef issued a ruling that the goji berry is a vegetable. Today, stores with a standard kashrut certification rely on this heter and sell fresh goji berries. But stores with mehadrin certification do not rely on the heter (if goji berries might be orlah, then it would be prohibited to eat and even receive benefit from selling them – issur hana’ah!). This is why such stores do not sell fresh goji berries today. Most goji berries sold in health food stores are dried and imported from abroad. When there is a doubt about orlah grown outside the Land of Israel, the fruit is permitted. So dried goji berries are permitted, even to those who are stringent about eating mehadrin kashrut.