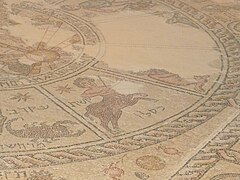 One of the most unique features of the ancient synagogue in Zippori is the direction of prayer. The synagogue does not face Jerusalem like all synagogues all over the world today, but rather to the west. This is done in accordance to the view that appears in the Gemara (which was not accepted in Halacha) that since the Divine Presence (Shechina) is always in the West, prayers should always face westwards.

The synagogue was discovered in archaeological excavations done by the Hebrew University in 1994 and it is estimated to have been built during the 5th century.

The most famous feature is the spectacular mosaic of the synagogue. The central part is filled with Zodiac signs with at the center the solar star on a wheel carriage pulled by four horses. Unlike today’s astrological context of the zodiac signs (prohibited by Halacha), at that time these signs represented the agricultural seasons, a theme which, of course, finds its place in our prayers till today. In addition to these symbols in the center of the mosaic, the arms are full of representations of Biblical stories, such as the Akeidat Yitzchak, the dedicating Aaron, Temple worship and the Holy Arch. The captions in the synagogue are written in 3 languages: Hebrew – the holy tongue. Greek – the language of government and administration and Aramaic – the language spoken by the masses in the region.

Zippori has been documented during the First Temple and according to the Talmud the city was walled already in the time of Joshua. During the time of The Second Temple the city rose to great importance.

According to the Talmud The name Zippori (bird) is because the city is “sitting on the mountain like a bird”.