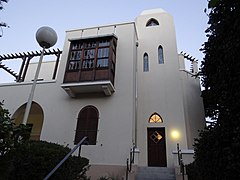 Beit Bialik is one of the most famous historic houses in Tel Aviv. The house was designed by architect Joseph Minor, and was built in anticipation of the arrival of Chaim Nachman Bialik to Israel in 1924, with the complete involvement of the poet in the design of the house. After Bialik’s death in 1934 the house served as the headquarters of the Hebrew Writers Association, and the Bialik Association. Over the years the house was turned into a children’s library, until 1980 when it was rededicated as a museum. On the lower floor of the house are the Bialik archives. The archive brings together the complete cultural and national works of  Bialik including rare manuscripts, videos, songs, stories, essays, speeches, documents, etc.

Chaim Nachman Bialik, who is considered the country’s national poet, was born on the tenth of Tevet 1873 in Ukraine. His childhood was difficult; he was orphaned at a young age and was raised by his tough grandfather. Even his memories of his father, who ran a tavern, made him uncomfortable, something which is reflected in Bialik’s writing, even many years later.

Bialik studied in the famous Volozhin Yeshiva – considered to be the mother of all yeshivot – and stood out there for his mastery of Hebrew, and his ability of expression, especially his writing. Bialik decided to leave the Yeshiva, along with many other students after the outbreak of a conflict between the Rosh Yeshiva the “Natziv” and the students surrounding the appointment of his son, Rabbi Chaim Berlin, as the new Rosh Yeshiva. After leaving the Yeshiva, Bialik moved to the big city and cultural center – Odessa. There he was quickly identified as an extraordinary writer, and with the recommendation of Echad Ha’am, he began to write for several newspapers and magazines, something he continued to do for decades. After the terrible Kishinev pogrom he was sent to survey the community and the horrors it went through. After coming back to Odessa he wrote one of his most famous works – “In the City of the Killing”an unusually harsh poem with tough accusations against the rioters, the Jews and G-d himself.

A decade after he arrived in Israel he was diagnosed with cancer and went to Vienna to undergo surgery. The surgery failed and he died shortly after. He was buried in Israel, with almost 15% of the Jewish population of Israel attending the Levaya.

Beyond the dozens of songs, including children’s songs, known by everyone – Bialik also renewed several words, including the Hebrew words for: aircraft, reaction, camera, bonus, productivity, import, export and many other modern words.