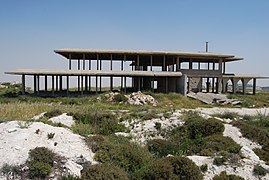 The partially built structure that you saw in last week’s picture was supposed to be the official and grandiose summer palace for King Hussein, the previous King of Jordan.   The construction of the palace was a reaction to the building of the Israeli President’s residence in the Western part of the capital.

The construction began less than a year before the outbreak of the Six Day War, which obviously disrupted the program when the 96th Battalion of the Harel Brigade took over the strategic place after a relatively short battle.

Hussein’s palace is located on the Tel-al-Ful hillside nestled between the neighborhoods of Pisgat Zeev, Shuafat and Beit Hanina in the northern edge of Jerusalem.

According to some experts this exact location was the biblical city “Giv’a” which was the primary city of the tribe of Benjamin and the location of the tragic story of Pilegesh BaGiv’a.

There are even those who believe that this is also the biblical place named Givat Shaul, King Saul’s seat of power (not to be confused with the contemporary neighborhood of Jerusalem which is named after the late Sepharadic Chief Rabbi Yaakov Shaul Elyashar whose son was among the founding group of the neighborhood).

Once the kingship relocated to the City of David and Jerusalem the hill lost its strategic importance. Still, archaeological excavations carried out at the beginning of the last century found the remains of many settlements built over the centuries.

Yom Yerushalayim which we will celebrate b”h this coming Sunday, indicates not just capturing those important places but also the anniversary of the death of the prophet Samuel who anointed both Saul and David as kings over Israel.