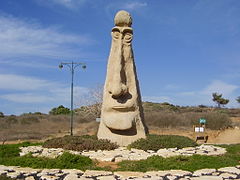 The statue of the artist Emilio Mogilner “The Hill-Keeper” was erected in Ness Ziona in 2001. It symbolizes the spirit of nature conservation and natural open spaces. Another three similar statues are scattered across the country. The largest of them all stands 17 meters high and weighs 450 tons. It is called “The Guardian of the Negev” and is located at the entrance to the Ramat Hovav industrial zone. The idea is that the statue supposedly protects nature from harm caused by people want to exploit it. The statue was built by Mogilner day.

The beginning of the city of Ness Ziona was in a barter transaction that took place in Odessa between a Chabad Hasid who was also a member of the ‘Hovevei Zion’ Movement named Reuben Lehrer and a German Christian. Lehrer exchanged his home in Odessa in return for an area of ​​approximately 2,000 hectares in Israel. The deal was made prior to the buyer ever seeing the land, and he was convinced that it was near Jerusalem and in excellent condition. Only after his arrival in Israel with his family did he discover the disrepair of the property and the great distance from The Holy City.

One of the unique characteristics of this city is an old mosque which was converted into a synagogue the local Arabs left.